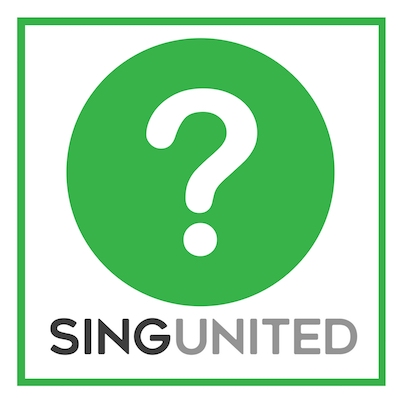 As a result of the Corona crisis, we have taken creative steps to ensure our singers are kept “together” in as many ways as possible.

At a time when people need people more than ever, here is all the info on how Virtual We Sing United will work, subject to guidance, in Autumn 2020. 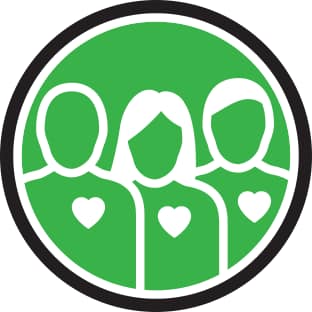 Things might be far from normal, but what hasn’t stopped is the work behind the scenes at Sing United to try and give our singers as many chances as possible to spend time together and sing even when physically apart.

Sure technology may mean we need to make compromises, but we passionately believe that continuing to keep our singers connected at a time when people need people the most, is the right thing to do for all of our souls, and the overwhelming feedback from last term showed our Green Heart Army appreciated it.

And one huge advantage that technology DOES give us, is that we can join in virtual experiences with anyone, anywhere in the world, without needing to be in the same room.

So now we want YOU to be part of our Virtual We Sing United.

Even if you’ve never sung with us before. Wherever you are in the world.

We’ve had a busy summer making plans for what we hope will be next term’s performances. It goes without saying that this all comes with the caveat that any plans are subject to change depending on government guidance on rehearsals and performances.

That said, if we’re allowed to do it, this will be a first for Sing United and we’re thrilled to announce…

The plan for us next term is to take about 15 songs from previous shows and 1 or maybe 2 more, and create a best of Sing United song pool.

We’ve got a massive singer vote running this week as everyone remembers their favourite Sing United memories.

Rest assured you can expect a selection of pop, folk, blues and soul songs that have one very important theme: music with meaning. We sing songs about real places, real stories, real people and real causes. You will FEEL this music even if you don’t know the song when we start.

?”When is this happening?”

?“Are these in person or virtual rehearsals?”

Depending on guidance rehearsals will either be all Zoom, partial virtual and partial in person, or fully in person (the latter obviously unlikely).

Everyone will have the choice of what they want to do of course.

?“Are there going to be performances?”

Guidance allowing, the plan is to do an outdoor tour of places and locations Sing United have sung at before during October and November, many of which were originally outdoor anyway, or outside nearby when it’s not possible to be inside.

We have provisional arrangements in place with:

Making sure there were 3-4 songs from each show we’ve done in the arsenal, we would perform a handful of songs at each venue on the tour.

Even if restrictions mean we can’t perform together in person later this year, we will organise virtual singing recording opportunities the kind of which we did last term that everyone can be part of.

We will also endeavour to live stream any performances we are allowed to do to allow singers who can’t be there to sing along and feel part of it.

?“I’ve never sung with Sing United before and won’t know any of the songs”

Understood. You would have quite a bit of new material to familiarise yourself with, especially if you wanted to perform with us in person.

But I’ll be notebashing (going through the parts) in our rehearsals, and the music scores and recorded rehearsal tracks will be available on the site for you to download and practice with as much as you like.

Also, of course, if you are in a different location and will just be joining us for the virtual experience, there’s no pressure to get them all memorised!

Every virtual rehearsal will be recorded for you to watch back if you want extra help or miss a session.

Hand on heart I’m actually way more interested in people feeling valued, special, and getting a huge mental boost from actually being able to sing with each other or at least near each other than it being musically perfect.

This is a time we need to look after each other and all our mental health. We’d be honoured if, even if only for a few months, you’d like to be part of the Green Heart Army.

We’re choosing to see this strange time as an opportunity to try new things and make new friends.

?“How do virtual rehearsals work?”

When we do Zoom rehearsals you can’t hear each other, other than when we’re having a natter!

Everyone can just hear me. Either it’s me playing the piano for notebashing or accompanying, or it’s the recordings of the shows that people are singing along to (we have recordings of every show professionally done).

The music appears on the screen but obviously it’s also on the site for you guys to print or use on a tablet or computer.

?”Can I be part of this even if I definitely can’t come and sing in person even if we’re allowed?”

Absolutely. The more the merrier!

If you were up for it there’d be nothing stopping you guys joining us virtually for the term as you’d be in a very similar position to everyone else other than you don’t know any of the arrangements in advance. However you’d be able to access the rehearsal tracks and scores for them all on the site and partake as much as you wanted even if you can’t physically come to do the tour.

?“What precautions are you taking if you hold sessions in person?”

Your safety is paramount to us and we won’t be suggesting anything that we’re not allowed to do. We are in contact with both the council and our rehearsal venue to ensure that if needs be we limit numbers, and take care of both social distancing and hygiene requirements.

We’re also closely monitoring the latest research around the safety of singing in a covid context, and the government guidance.

We realise people will all have their own individual circumstances and they will, of course, be totally respected and supported.

?”What if it rains when we’re supposed to sing outside?”

We’re sourcing some new outdoor merch to help with the possible weather conditions – with the good old British weather we need to be prepared for anything!

We have a monthly subscription of £20 a month to be part of Sing United. This gets you access to all the rehearsals, the sheet music downloads, the rehearsal tracks, the members area on the site, our Facebook members group, and as many of our singing opportunities as you want. That will include you being able to take part in any virtual singing recording projects we add to next term.

If you only wanted to be part of next term, you would be joining for 3 months to cover the term, so a total of £60. But as it’s a rolling subscription, you could of course continue to be part of the Green Heart Army and sing with us afterwards if you enjoyed being part of it, and what form that would take in January would obviously be announced when the guidance is clear for then. Essentially you can cancel your membership at any time inside your account area of the site. We only want happy singers.

?”This sounds amazing! How can I book my space?”

We’re opening the doors NOW if you want to join us, and will be closing them on Monday August 31st at 5pm

If you have ANY questions please comment below or email hello@singunited.co.uk. 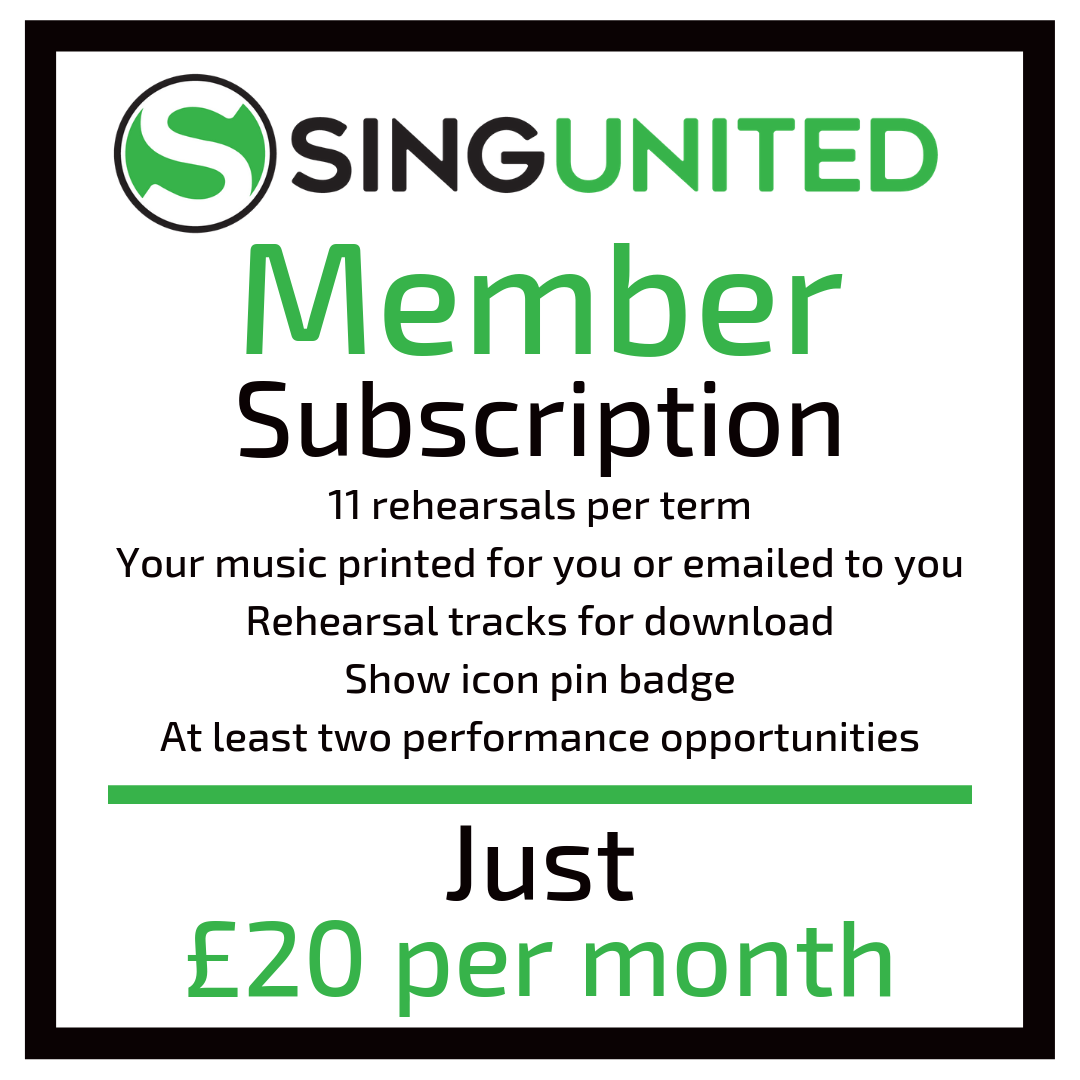 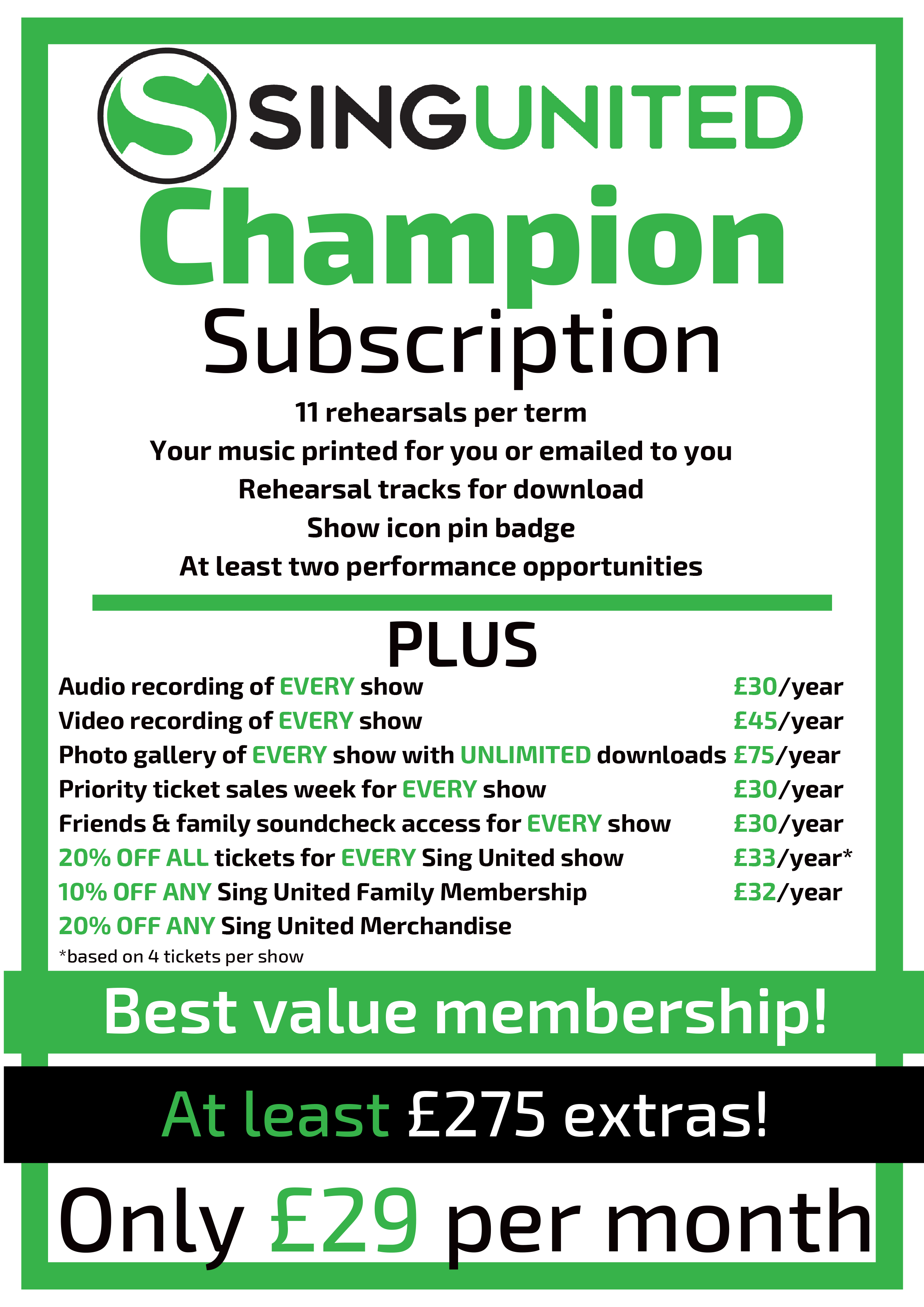 Each term, the sign up process to become a member of Sing United is the same.

Spaces are strictly limited, so please follow the guide below if you want to secure your place.

What if I can’t make all of the rehearsals?

We know that sometimes you would love to join for a whole project but can’t make all of the rehearsals. If that is the case for you, we don’t want you to feel excluded from taking part. After all, this is about uniting! We know that life is busy and maybe you can only come some weeks and not others – no problem. You have 2 options available:

You can still sign up with one of the 2 membership packages and access the exciting extras that are included.
Or you are still welcome to attend rehearsals and pay as you go at a cost of £10 per session. All we ask is that if you want to take part in the concert, you must have attended a minimum of 8 of the 11 rehearsals.

What if I can make the rehearsals but not the concert?

We know that for some people, rehearsals are as much fun as the concert.  We also know they don’t want to miss the whole experience just because they have another commitment on concert day. So, if this is you and you want to come to rehearsals knowing you can’t make the concert, don’t worry! You can still join! All we ask is that you make sure your Musical Director knows no later than 4 weeks before the show.

I’ve got a friend who would like to come and try out Sing United for a session.

Great! They are welcome to come and join us for a session and see what Sing United is all about, completely free of charge! If this is early in the rehearsal period and they would like to attend future rehearsals, they are very welcome. They will simply pay a cost of £10 per session. See “What if I can’t make all of the rehearsals?” above.

What do we wear for our performances?

It’s really important to me that you are comfortable and have some creativity when it comes to what you wear when performing with Sing United. Smart, yes, but also with freedom to have some variety. Therefore, you can wear ANY combination of the Sing United green, black and white. I’m not after a uniform look of black plus the green, I would like white to be incorporated too. Ladies, feel free to wear sleeves or not, skirt or trousers whatever your preference. So for example, you could have a black lower half, a white or black top half, and accessorise with the green. Or you could be all in black, barring white and green accessories. Whatever works for you.

All I ask is that you try to match the Sing United green as closely as possible. To see the hex / RGB / CMYK codes for the green, you can click HERE.

What musicians will accompany us when we perform?

Sing United is backed by a band of top class north-east musicians. The instrumental line up will be piano, acoustic guitar, violin, double bass and percussion. The emphasis is on providing a warm, predominantly acoustic backing, allowing the singers to shine! 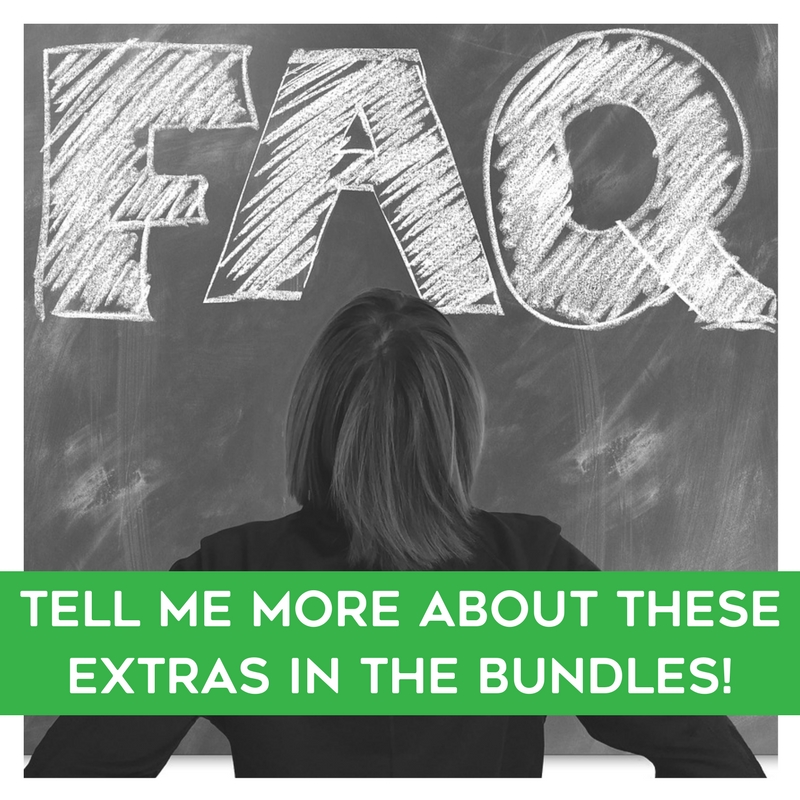 Tell me more about these extras in the bundles!

We want Sing United to be about you! So, we have put together a list of extras that we think people who sing for fun will love! Then to save you money, we’ve bundled them in the different membership packages that are available. Which is your favourite?